(Romans KJV) For whom he did foreknow, he also did predestinate to be conformed to the image of his Son, that he might be the firstborn among many brethren.

Out of all the scriptures in the Bible that could boggle oneâs mind, this scripture has to be at the top of the list. There are so many deep theological aspects to this scripture that it is difficult for most folks to fully understand the depth of each one. For example, when it says...God foreknew us; He predestinated us, and His will is that we be conformed into the image of Christ...it takes a lot of Godly understanding for oneâs mind to absorb all of that.

What does it mean to be conformed into the image of Christ? It means that oneâs mind, will, and emotions must be reshaped. We are born into the natural, but we must be reborn into the spiritual. Being reborn (or born again) starts the process of reshaping oneâs thought patterns, desires and hopes from selfish things that are un-holy into holy things that please God.

Over the years I have noticed how strong âself-willed controlling peopleâ reshape the mind, will, and emotions of others through intimidation. They seem to have the ability to render others helpless while conforming them to their own will.

Growing up in on the farm, we grew all kinds of vegetables, fruits, watermelon and cantaloupe, but we never thought of them being any other shape than what they were intended to be. However, it seems that for convenience sake there are those today who are trying to grow square watermelons instead of round ones. The thinking behind this square watermelon idea is that it would make them easier to transport. 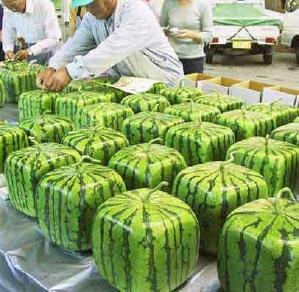 However, the extra labor it takes in growing these box shaped melons adds significantly to their cost and therefore it is not a practical idea for the time being.

Satanâs idea for conforming us into his image is pretty much like the growersâ idea of the square watermelons. He wants to take that which is natural (such as a round watermelon), and âdeformâ it into something unnatural, because to him it seems to be more practical.

God on the other hand, takes that which is natural and conforms it into that which is spiritualâ¦like Jesus. Satan deformsâ¦ God conforms. Satan wants things to be seemingly practical for the now. God wants things to be spiritual for the now and for eternity. It is God who foreknew us. He is the one who also predestined us âto be conformed to the image of his Son, that he might be the firstborn among many brethren.â

The idea is that we yield ourselves to God the Father for âconformingâ and not to Satan for âdeformingâ.

Father,
Help us to be satisfied with our natural shape while allowing You to conform our spiritual shape into the image of Christ. You taught us that we are âfearfully and wonderfully made in Your imageâ and that is good enough for us.
Amen